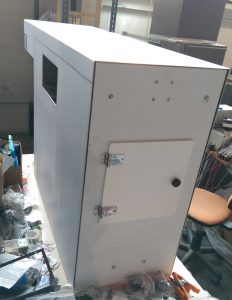 7/26/2016
Modified a version of Tiny-Slicer to output files for the Pearl Printer.  Fast output, thanks to using the GPU for slicing.

6/18/2015
Up to 50w power on the laser, and newly optimized printing algorithms running today. Set records for scan/print speeds, first hitting 750mm/s a week ago, then in rapid succession 1500 then 3000 mm/sec. World’s fastest?

5/15/2015
Big excitement – the 100w laser is printing parts! Actually only running it at 15w, as it’s freakishly powerful. Still some hardware issues, but way cool to see it finally blasting away!

12/10/2014
100w lasers (3) are here! Some of the remaining components have also arrived, waiting on mount components to finish assembly.
Implementing super quiet recirculating water cooling system – no fans.
We keep getting comments on how quiet the machine is.

11/21/2014
The 100w fiber laser is on its way. After rebuilding, tests to begin early December.
Testing new powder designed for fiber laser – very nice detail!
Connected with the BAAM Hub, Type A Machines, Mind-2-Matter, PhaseSpace. Great people, great businesses! We’re negotiating for a space next to M2M to set up mfg.
Working with metal fab to produce cartridges.

10/9/2014
The prototype Pearl Model A printer is functioning with a low power test laser, and without the removable cartridges. We are running material tests on a variety of materials, currently nylon 12 with carbon fiber.

The Model A version with cartridges has been designed, and we are negotiating with laser vendors for the high power fiber lasers. Our goal is to have the Beta version with 100w laser ready by the end of November, 2014. Beta systems ready for shipment to customers by end of January, 2015.